…the fall sport season has fallen upon us.

As soon as last fall wrapped up with baseball and soccer the little guy wasted no time at all to inform newmom and I that we were not to enroll him in soccer this year. Instead he wanted to play flag football(like his friend F(name shortened)) plays.  So after our first foray into Pony league baseball in the spring we finished the school year, had a relaxing, short summer and BAM!  We’re back to school which means sports are a fast follow.

So we granted the little guys’ wishes and enrolled him in flag football, AND Pony league fall baseball.  So here we are, another fall with two sports!  Time to start figuring out scheduling around practices as well as preparing to sacrifice a chicken to the schedule gods that there’s no overlap.

So this past weekend we had evaluations for both leagues. Saturday morning we were up and going for our first taste of flag football.  It wasn’t all that different than evaluation for baseball in the spring, they broke the boys up into random groups and then sent them to complete a series of drills to see where he falls skills-wise.

Here are a couple of action shots… 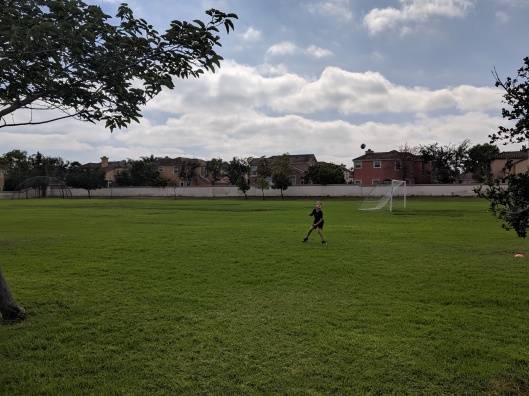 Keeping an eye on that ball!!!

Finishing up 40 yard dash (WAYYYY in the back)!! 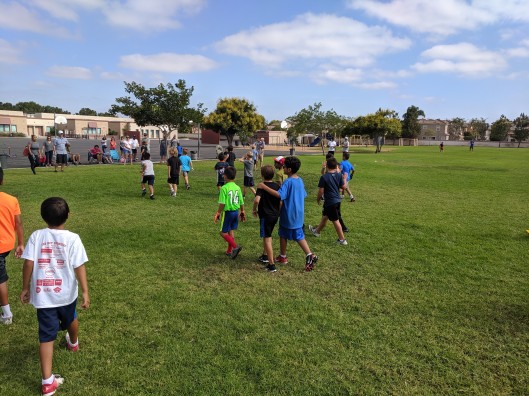 after evaluations, friend F. and the little guy, pals for life!

We were told that we would hear from a coach soon, that they would take results from evaluation to make the teams as even and fair as possible.

So because the fun never ends, we had baseball evaluations the next day.  We went through the evaluation process last spring so we were familiar with it.  Because fall ball is different than spring ball we didn’t really know what to expect.  The official start time was 11:30 and the little guy and I arrived a few minutes after that. When we signed in we were NUMBER 84!!!! and in GROUP 6!!  We ended up being at the park for a total of FOUR HOURS watching the other groups go before we got out turn.  When we finally got our turn and he went out to the field and really did a great job.  It was GREAT to see him out there again and at the end they ask a couple boys to stay so they can see them pitch. Last year our little guy was not selected to stay but this year he was!(I think I might have been more excited about this than he was!)  Although it was a long time the weather cooperated (we had a nice cool breeze), we were able to spend some time together and play catch, chat and even leave the park to grab a quick bite around the corner and come back.

Here is some of the action!

I liked the way this picture came out so much it is my background on my work computer!!

OK kid, show ’em what you got!

We are still waiting to hear back from both leagues on his team selection.  We did however get asked if we were ever interested in him joining the league’s travel team (BU8) which is a great honor just to be asked.  One of our friends with older kids had a son who was on the team and that boy is a starting pitcher on his high schools team.

OK, let me just get this out there.  I am not one of those delusional parents who thinks his kid is the best and every game is an exhibition for college/pro scouts, I am a dad who loves seeing his kid excel in games he loves to play.   I would be just as excited if he was entering a photo or piece of art in a competition as well.

We are about to get very, very busy…

Some boys like to play sports. Others are not into sports and their interests into other things.  Building, art, creating things, just other things. Some boys are better at sports than others.  Our little guy loves to play. ANYTHING with a ball, he is all about it.  He has always loved throwing, catching, kicking, bouncing and rolling anything round (even baby pumpkins!).

So over the past couple years, organized youth ports has been a part of the family routine in the Spring and Fall. Over the past couple years Xavier has played on four Tee-ball/Baseball teams and has completed two seasons of Soccer. He has also been a part of an intermural basketball program offered by the city.  This past season (fall of 2018) we enrolled our little guy in not one, but TWO sports. He was on the Green Dragons (soccer) and the Flames (A-league Baseball). It was either going to be great or a catastrophe.  Did I mention that new dad was the head coach of the Soccer team and the co-manager of the baseball team?  Now it sounds more the latter (a catastrophe) than the former (GREAT).

Well it definitely kept us busy. Three practices a week and two games over the weekend, our week was pretty much all about school and practice.  I was also blessed with having a pretty good group of kids on both teams.  As always there were a few challenges, but no ‘bad’ kids. I learned a lot of lessons this past season which will make me a better coach and father in the future.  The first is patience, and realizing that I am very patient with some things, not so much with others.   I also learned how difficult baseball can be for some of the kids, and why it has the stigma of being ‘boring’.  It is a great game, but realistically there is not a lot of action unless the kid is at bat, pitching or is playing first base.  Otherwise it is a lot of standing around and when you have a couple of kids who have trouble focusing, it can be VERY challenging, for both the kids and the coaches.

This season was the first season the kids pitched. New mom and I had real concerns about this.  It turned out to be not quite as bad as I first imagined.  but it was still challenging.   it was quickly apparent the key to success at this stage was to have a pitcher that can get the ball across the plate.   Unfortunately the Flames did not have a very successful season, but I hope the kids had fun and learned something about the game.

The final game of the season, our little man made his pitching debut.   He did pretty good for his first (and only) trip to the mound this season. 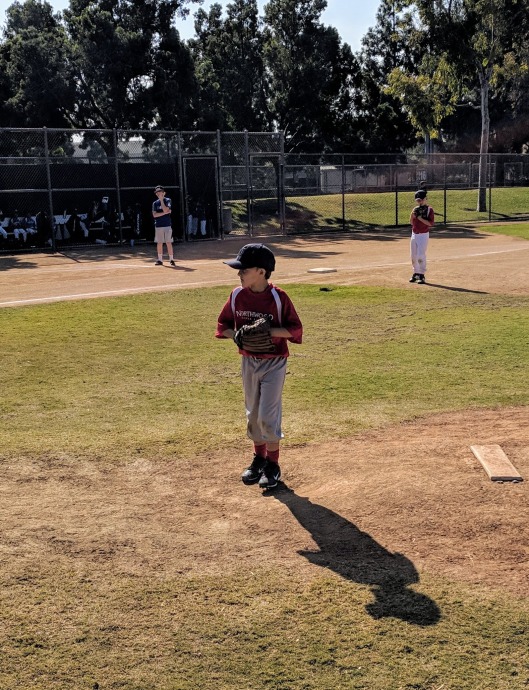 Now moving onto the other sport that consumed our fall, soccer. I had the pleasure of coaching the Green Dragons in the Boys under seven (BU7) division.  This was our second season of AYSO and I asked our friend Albert to be my assistant coach again. His son Raiden was on our team last season and again this season.  The boys vastly improved over the year but at this level, the team is randomly selected with no ranking or skill matching. So you can end up with a couple of kids who have played for a few seasons and are the best in the entire division or end up with five kids who have never played organized sports before.

My team consisted of five boys and those aforementioned kids who are the best? Not on my team. What I did have were five GREAT kids who tried very hard every game. I would be honored to have this same group of boys again, but I believe we will start to see a little more parity at upper levels, so the likelihood of that happening are pretty slim. 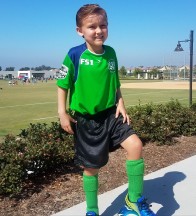 It was a lot of fun coaching soccer, and the boys continued to improve throughout the season.

So what other lessons did we learn about a two sport season? I honestly have to say the most important is be ready for the grind. It is a long season and can tire you out quickly. But it is very, very rewarding. I wouldn’t trade the experience for the world. I want the little guy to look back fondly on his youth sports and say with pride: ‘My dad was there and coached my teams.’