So a little bit of background to start this off.  I moved to California just over twenty years ago.  When I arrived I only knew two people, both of which worked very long hours so I was pretty much on my own.  It got a bit lonely at times.  It was surprisingly difficult to find work right away but once I did I started to meet people and build a network of friends who eventually became my California family.  One of those people early on was a wonderful woman named Vicky M.  She was also originally from Ohio (and would eventually move back there) and told me she was a part of the Ohio State Alumni club of Orange County and that I should come check it out.

…Ohio State Fans in Orange County?  That get together for every Buckeyes football game? And other fun events throughout the year?

Little did I know then what a big part of my California life that club would become.   Now my first experience with the club was actually not a good one.   My roommate, best friend and I went to the game watch location to watch THE game, Ohio State v. M*&^*^an(also known as ‘that team up north’) and there was a table set up as we were walking in.  There was a cover to get in because there was a buffet.  We didn’t want the buffet, just to watch the game and maybe order an appetizer.  We were told we couldn’t go in if we weren’t going to pay and have the buffet.  So we left and watched the game at another sports bar that was close by.

But I did not let that deter me, I told my friend about the experience and she apologized profusely and told me to give it another chance.  Boy am I glad I did.  It was a BLAST.  The atmosphere was great, the people were great and it was a wonderful experience as advertised.

So over the years of attending almost every game watch and other events, I was invited to sit on the board.  I would eventually become co-president of the club before my life changed (dad duties called!) and I stepped down.

Wait, there is another important part of this post.  The Alma Mater of ‘The’* Ohio State University is called ‘Carmen Ohio’  The end of the Verse that everyone knows and sings ends like this:

Summer’s heat or winter’s cold
The seasons pass the years will roll
Time and change will surely (truly) show
How firm thy friendship … OHIO!

THAT is what this post is about.  The friendships that have come from our involvement in the club.  In those early years on my California residency, before I knew newmom and started our own family (and become a part of hers), these wonderful people who shared my passion for Ohio State were really my family.  Genesis 2: 18 starts “The Lord God said “It is not good for the man to be alone…” and the friends I made through the club helped me through some pretty rough times.  Over the years some of these people have invited me to their homes for holidays, for meals, to visit them when I was out of state in their current hometown.  These are lifelong friends.

Over the years, we have lost members to time, others have moved on to other states for Jobs or family, and other I have just lost touch with overall.  This is about one of those people who moved to another state.  Our family friend Julie came in from New Mexico last weekend and stayed with our other family friend Susan (who I love dearly!). Susan reached out to me to tell me Julie was going to be in town and we made plans to have breakfast.   We all met last Saturday morning for breakfast and it honestly didn’t feel like its been five years since she left.  It actually felt like we just saw her last week.

Yup, five long years ago she left for New Mexico.  She lost her son and dad pretty close to each other and it was just time for her to move on from California.  During our conversations at breakfast she noted that she is looking to relocate back to Ohio.  But that morning, time didn’t matter, it was a table of friends getting together again.  Julie and Susan have been there since the very beginning of our little guys’ life and watched him grow.  They have both gone to his baseball games (Julie was in town and got the opportunity to see the little guy play!) and I am sure they will both be around to see other milestones in his life.  I am very excited to share them with both of these wonderful women.

Kudos to the writer of Carmen Ohio (fun fact, another member of the Alumni club is related to the author) whose words have and will continue to ring true.  No matter how many seasons pass, how many years roll by, our friendship will be strong.  This is an important lesson for the little guy to learn. the value of long term friendships.  In an age where more and more communication is done electronically (including this blog!) it is even more critical to build these types of friendships. 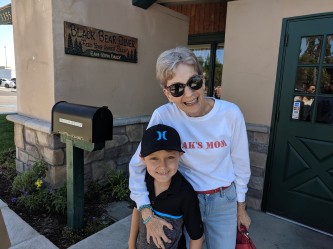 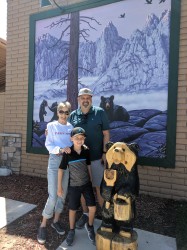 Photo credits to Newmom, that is why she is not in the pictures!!  She was there, I promise.

*recently my beloved Ohio State university tried to copywrite ‘The’. I think that is a little over the top!